Washington – The COVID-19 pandemic has been a key factor in slowing progress toward universal energy access. Globally, 733 million people still have no access to electricity, and 2.4 billion people still cook using fuels detrimental to their health and the environment. At the current rate of progress, 670 million people will remain without electricity by 2030 – 10 million more than projected last year.

The 2022 edition of Tracking SDG 7: The Energy Progress Report shows that the impacts of the pandemic, including lockdowns, disruptions to global supply chains, and diversion of fiscal resources to keep food and fuel prices affordable, have affected the pace of progress toward the Sustainable Development Goal (SDG 7) of ensuring access to affordable, reliable, sustainable and modern energy by 2030.

Advances have been impeded particularly in the most vulnerable countries and those already lagging in energy access. Nearly 90 million people in Asia and Africa who had previously gained access to electricity, can no longer afford to pay for their basic energy needs.

The impacts of the COVID-19 crisis on energy have been compounded in the last few months by the Russian invasion of Ukraine, which has led to uncertainty in global oil and gas markets and has sent energy prices soaring.

Africa remains the least electrified in the world with 568 million people without electricity access.  Sub-Saharan Africa’s share of the global population without electricity jumped to 77 percent in 2020 from 71 percent in 2018 whereas most other regions saw declines in their share of the access deficits. While 70 million people globally gained access to clean cooking fuels and technologies, this progress was not enough to keep pace with population growth, particularly in Sub-Saharan Africa.

The report finds that despite continued disruptions in economic activity and supply chains, renewable energy was the only energy source to grow through the pandemic.

However, these positive global and regional trends in renewable energy have left behind many countries most in need of electricity. This was aggravated by a decrease in international financial flows for the second year in a row, falling to USD 10.9 billion in 2019.

SDG7 targets also cover energy efficiency. From 2010 to 2019, global annual improvements in energy intensity averaged around 1.9 percent. This is well below the levels needed to meet SDG 7’s targets and to make up for lost ground, the average rate of improvement would have to jump to 3.2 percent.

In September 2021, the United Nations High-Level Dialogue on Energy brought together governments and stakeholders to accelerate action to achieve a sustainable energy future that leaves no one behind. In this context, the SDG 7 custodian agencies, the International Energy Agency (IEA), the International Renewable Energy Agency (IRENA), the United Nations Statistics Division (UNSD), the World Bank, and the World Health Organization (WHO), as they launch this report, are urging the international community and policymakers to safeguard gains toward SDG 7; to remain committed to continued action towards affordable, reliable, sustainable, and modern energy for all; and to maintain a strategic focus on countries needing the most support. 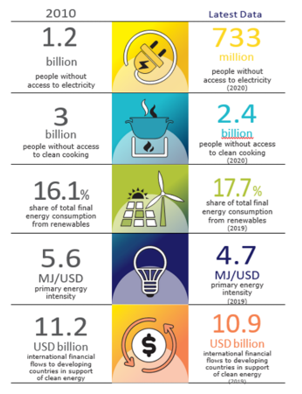 However, the pace of progress in electrification has slowed in recent years which may be explained by the increasing complexity of reaching more remote and poorer unserved populations and the unprecedented impact of the COVID-19 pandemic. Meeting the 2030 target requires increasing the number of new connections to 100 million a year. At current rates of progress, the world will reach only 92 percent electrification by 2030.

Between 2010 and 2020, every region of the world showed consistent progress in electrification, but with wide disparities. Electricity access in Sub-Saharan Africa rose from 46 percent in 2018 to 48 percent in 2020, but the region’s share of the global access deficit rose from 71 percent in 2018 to 77 percent in 2020, whereas most other regions, including Central and Southern Asia, saw declines in their share of the access deficits. Sub-Saharan Africa accounted for more than three-quarters of the people (568 million people) who remained without access in 2020.

Clean cooking. The share of the global population with access to clean cooking fuels and technologies rose to 69% in 2020, an increase of 3 percentage points over last year. However, population growth outpaced much of the gains in access, particularly in Sub-Saharan Africa.

As a result, the total number of people lacking access to clean cooking has remained relatively stagnant for decades. Between 2000 and 2010, this number was close to three billion people, or one-third of the global population.

It dropped to around 2.4 billion in 2020. The increase was primarily driven by advancements in access in large, populous countries in Asia. In contrast, the access deficit in Sub-Saharan Africa has nearly doubled since 1990, reaching a total of around 923 million people in 2020.

A multisectoral, coordinated effort is needed to achieve the SDG 7 target of universal access to clean cooking by 2030. It is critical that the global community learns from the successes and challenges faced by countries that have attempted to design and implement clean household energy policies.

Renewables. Ensuring universal access to affordable, reliable, sustainable, and modern energy implies accelerated deployment of renewable energy sources for electricity, heat, and transport.  Although there is no quantitative target for SDG 7.2, custodian agencies agree that the share of renewable energy in total final energy consumption (TFEC) needs to rise significantly, even though renewable energy consumption did continue to grow through the pandemic, overcoming disruptions to economic activity and supply chains.

While the share of renewable capacity expansion rose by a record amount in 2021, the positive global and regional trajectories mask the fact that countries where new capacity additions lagged were those most in need of increased access. Moreover, rising commodity, energy and shipping prices, as well as restrictive trade measures, have increased the cost of producing and transporting solar photovoltaic (PV) modules, wind turbines, and biofuels, adding uncertainty for future renewable energy projects.

Renewable shares need to reach well over 30 percent of TFEC by 2030, up from 18 percent in 2019, to be on track for reaching net-zero energy emissions by 2050. Achieving this objective would require strengthening policy support in all sectors and implementing effective tools to further mobilize private capital, especially in least-developed countries, landlocked developing countries, and small island developing countries.

Energy efficiency. SDG 7.3 aims to double the global rate of annual improvement in primary energy intensity—the amount of energy used per unit of wealth created—to 2.6 percent in 2010–30 versus 1990–2010. From 2010 to 2019, global annual improvements in energy intensity averaged around 1.9 percent, well below the target, and the average annual rate of improvement now has to reach 3.2 percent to make up for lost ground.

This rate would need to be even higher—consistently over 4 percent for the rest of this decade—if the world is to reach net-zero emissions from the energy sector by 2050, as envisioned in the IEA’s Net Zero Emissions by 2050 Scenario. Early estimates for 2020 point to a substantial decrease in intensity improvement because of the COVID-19 crisis, as a result of a higher share of energy-intensive activities in the economy and lower energy prices.

The outlook for 2021 suggests a return to a 1.9 percent rate of improvement, the average rate during the previous decade, thanks to a sharper focus on energy efficiency policies, particularly in COVID-19 recovery packages. However, energy efficiency policies and investment need to be scaled up significantly to bring the SDG 7.3 target within reach.

International Financial Flows. International public financial flows to developing countries in support of clean energy decreased for the second year in a row, falling to USD 10.9 billion in 2019, despite the immense needs for sustainable development in most countries and growing urgency of climate change.

The amount was down by nearly 24 per cent from the previous year and may be worsened by the pandemic in 2020. Overall, the level of financing remains below what is needed to reach SDG 7, particularly in the most vulnerable and least developed countries.

The decrease was seen in most regions, with the only exception in Oceania, where international public flows rose by 72 percent. The bulk of decreases were concentrated in Eastern and South-eastern Asia, where they fell 66.2 percent; Latin America and the Caribbean, where they dropped by 29.8 percent; and Central and Southern Asia, where they declined by 24.5 percent.

Although the private sector finances most renewable energy investments, public finance remains key to attract private capital, including for creating an enabling environment for private investments, developing the needed infrastructure, and addressing perceived and real risks and barriers for investments in the energy transition.

Indicators and data for tracking progress. Tracking global progress for SDG 7 targets requires high-quality, reliable and comparable data for informed and effective policymaking at the global, regional, and country levels. The quality of data has been improving through national and international cooperation and solid statistical capacity.

However, after the pandemic hit and disrupted the rate of progress toward Goal 7, more investment in quality statistics is needed to know where we stand and how to get back on track. This is especially important for developing countries, particularly Least Developed Countries, to inform their national energy policies and strategies to ensure no one is left behind.

As Climate Impacts grow, so do Calls for ‘Loss and Damage’ Funds

COP 27 Presidency: This is our promise to Africa’s civil society

Climate Change negotiations – the roadmap to COP27 in Egypt

Ghana’s Crop Production continues to be Devastated by Climate Change