by Atayi Babs, Lima
Over one hundred delegates from countries around the world including leading representatives of the African civil society under the aegis of the Pan-African Climate Justice Alliance (PACJA) stood together for two minutes of silence to show solidarity with the people of the Philippines who are suffering under the lash of Typhoon Hagupit.
The latest reports say at least 21 people have been killed by floodwaters caused by the storm, that is continuing its painfully slow path towards the capital Manilla – 1 million people have been evacuated from their homes.At the UN conference centre in Lima civil society representatives called on Ministers arriving today and tomorrow at the climate negotiations to make progress towards a mechanism that effectively addresses loss and damage from climate impacts. Climate change is causing an increase in extreme rainfall and sea level rise is making the storm surges more deadly. Vulnerable countries like the Philippines are already counting the cost, last year Typhoon Haiyan left more than 7,000 dead or missing. 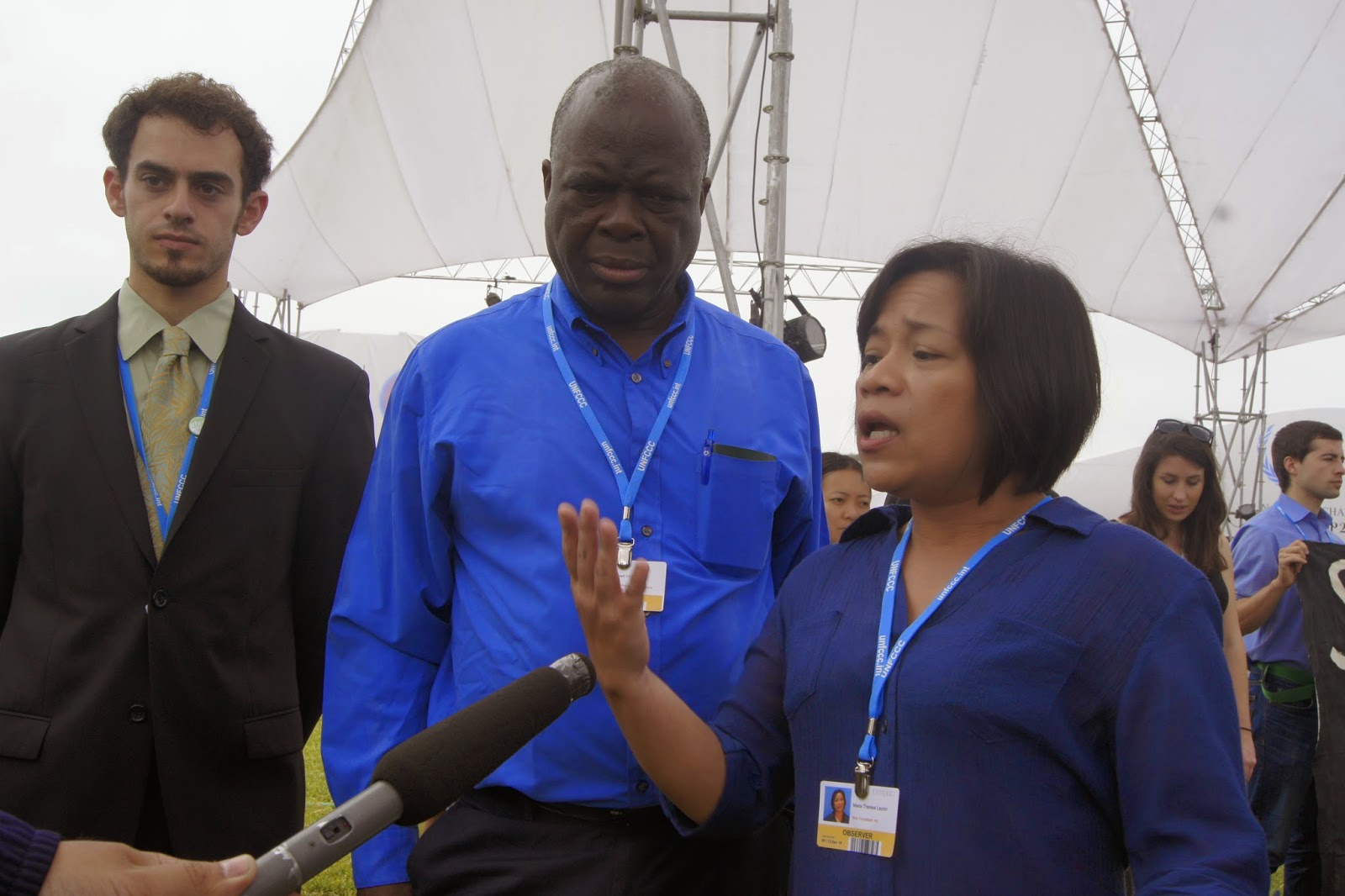 “We stand in solidarity with the Philipines today because we are one,” Robert Chimambo of the Pan-African Climate Justice Alliance (PACJA) declared. “Africa is in the same vulnerable boat with Philippines and that is why we are calling on those with historical responsibility and capacity to act now or we sink together in this titanic” Chimambo added.
Maria Theresa Nera-Lauron from IBON international in the Philippines said that her country does not want sympathy but action in solidarity. “You cannot talk about sympathy, while at the same time putting us on a path to more devastation — a path that will result in more severe weather events, more severe Bophas and Haiyans and Hagupits. We refuse to become a poster child for devastation and climate impacts. We in the Philippines are not drowning. We are not dying. We are fighting! We are fighting, and we need you to fight with us!”
Delegates arriving at the conference centre today were greeted with images from the aftermath of these storms, to remind them that climate vulnerable communities need to see urgent progress in Lima. Despite this some countries, including the UK and the USA, are actually undermining efforts at the UN climate negotiations to develop a comprehensive loss and damage mechanism that would provide support for countries already suffering the climate impacts that are ‘locked-in.’
Responding to the show of solidarity, Dewy Sacayan of the Aotearoa Youth Leadership Institute said  “We thank you for your sympathy, but we need more.” We need real action to put us on the path to a safe climate future.We have had enough. My family back home are already telling me grim stories about Hagupit. When I went to Tacloban after Haiyan to lead relief work, I saw things that I will never forget. My people have had three unseasonal typhoons in three years.”